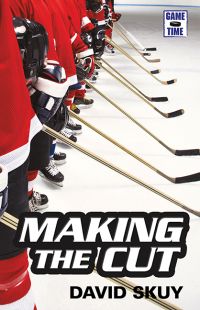 Competition is fierce, both on and off the ice, when Charlie is invited to Youth Elite Hockey School.In this third book in the Game Time series featuring teenage hockey player Charlie Joyce, a summer hockey program promises to provide the opportunity of a lifetime. There will be visits by NHL coaches, top trainers, and expert analysts, not to mention the chance to play with the best players in his age group, including his friends Scott and Nick... and his arch-rival Jake. Charlie is stoked.But things don't go as planned. While Charlie makes Team 1, things are going wrong between him and the other guys, and even the coaches seem to be down on him. To make things worse, the NHL coach's Stanley Cup ring goes missing. That is, until it shows up in Jake's gear. Charlie is pretty sure Jake didn't do it... and he's pretty sure he knows who did.The Game Time series is a perfect selection for hockey lovers and for the reluctant boy reader. Fast-paced, authentic scenarios, coupled with the competitive spirit of high school hockey create a truly compelling read.

DAVID SKUYis a lawyer, a writer and a Leafs fan to the core. He spent most of his childhood playingsome sport or another: hockey, soccer, football, tennis and a few others. What he remembers most is theintensity, the competitiveness, and the sheer enjoyment of playing a sport you love when you’re young. He has written five books in the Game Time series; a standalone novel called Undergrounders, winner of theSilver Birch Award; and two previous, multi-award nominated books about Bryan “Rocket” Rockwood —Rocket Blues and Last Shot. David lives in Toronto, Ontario. Visit him at www.davidskuy.com.